smart tv app development and the publisher landscape in 2020

Still got smart tv app development on the back burner? thanks to covid-19, smart tv streaming is #1, and OTT brands must catch up to create apps viewers love. 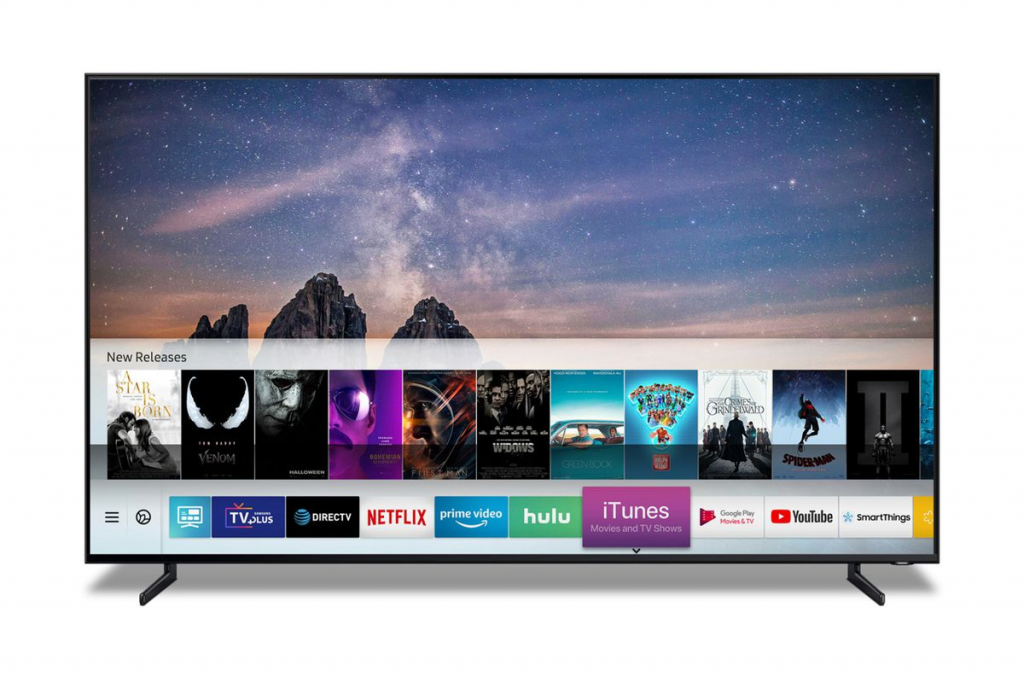 Many OTT publishers put off smart TV app development to prioritize launching apps for mobile, desktop, and popular streaming platforms/devices. But now research shows viewers streamed more OTT content from their smart TVs than any other avenue in the post-Coronavirus landscape.

Unfortunately, most smart TV apps and interfaces, well, suck. Consumers are often disappointed and frustrated with the user experience after dropping a few hundred bucks (or even thousands!) on a big screen touting tons of streaming video capabilities.

But OTT brands have a unique opportunity to take advantage of the shift to smart TVs by developing apps subscribers actually love.

why most smart tv apps suck

Versions of the smart TV have been evolving since the early 2010s. The smart TV umbrella began with big screens connected to the internet. Now, it includes internet-connected TVs that communicate with other wireless devices (like phones and tablets) and apps users can either download or access right from the home screen.

However, just because TV manufacturers have been trying to keep up with the OTT streaming landscape doesn’t mean they’re doing a good job. Aside from the picture and sound quality, consumers seem to agree that most smart TVs suck. And experts say it’s because:

TV manufacturers have always prioritized hardware. They’ve traditionally used these specs to drive competition and push “the next big thing” to market.

That’s why most smart TVs stick to a bare-bones user interface that leaves much to be desired. Menus aren’t laid out well, and search can be a tedious nightmare, making discovery feel more like a chore than a fun viewing experience.

In the end, software features like streaming app integration seem merely tacked on to compete with other industry-leaders rather than a priority. They lack the sophistication and optimization consumers expect, resulting in poor user experience.

Apps require significant processing power to run. And hardware for streaming devices is typically much more powerful than smart TV processors. This makes smart TV apps slower and clunkier than apps running on other devices.

Without adequate hardware to run the software required of these apps, it takes forever to generate a response after pressing a button or load and navigate different screens.

All these user interface (UI) issues ruin the user experience (UX). And that makes viewers less excited to engage with content.

Buyers expect their smart TVs to last at least seven to ten years, much longer than a phone or streaming device. However, streaming technology changes so rapidly that the firmware in TVs may become a roadblock to app updates.

A TCL exec told Forbes back in 2016 that app makers tend to provide support for their apps on a handful of the most popular devices, not every TV model out there [*]. Yet without necessary upgrades and support, features may break, causing apps to crash.

All these reasons prove that making TV software to run OTT apps isn’t a walk in the park.

The biggest smart TV manufacturers have decided to stop competing with the software in streaming platforms and instead incorporate them into their design.

Choosing to license smart TV software from Roku or Android, for example, alleviates manufacturers’ responsibility to design a UI viewers expect and gives the reigns to companies that know better.

Android TV, Roku TV, and Fire TV seamlessly integrate into many TV manufacturer’s OS to deliver a more streamlined viewing experience. These TVs share capabilities, such as using Amazon’s Alexa for voice control or providing access to the Google Play Store, to compete on the same level as other streaming devices.

It also means OTT brands have a chance to get in on the action — and at the perfect time.

ott brands: ride the covid-19 smart tv wave or get lost in the wake

Thanks to COVID-19 shelter-in-place measures, more viewers chose to stream content from their smart TV than anywhere else in 2020. 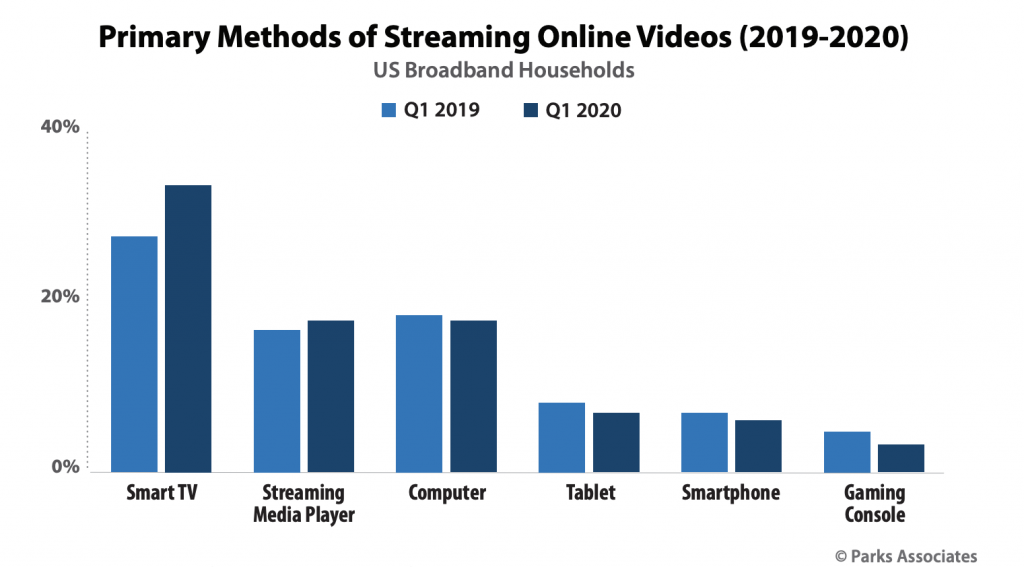 So OTT publishers competing with the streaming giants must have apps optimized for smart TVs to meet their subscribers’ demands. Brands can create, manage, and update these apps through each TV manufacturer’s chosen app store or marketplace.

As current trends and predictions highlight, OTT brands must integrate their apps within the smart TV realm if they want to assert their place in the market. Smart TV app development requires an understanding of:

The most popular languages to develop smart TV apps include:

Android TV may be the most popular smart TV OS. And since Amazon Fire OS is a fork of Android, if your app runs on Android, it will likely run on Amazon Fire TV too. However, Samsung devices favor TizenOS, which is Linux-based and totally different.

With TV manufacturers integrating standard OS from companies like Amazon or Roku, SDKs will hopefully become more streamlined in the future. This step should assist teams in a seamless app development process for both smart TVs and mobile devices.

read next: ott cross-platform frameworks: the good, the bad, and the ugly

In addition to programming for a variety of operating systems, your team will also need to code for each TV’s unique features and functionality. This includes different resolutions/screen sizes, processing power, user interfaces (including navigation capabilities), and functions (as well as native quirks).

Stats show remote control options like voice input rank high on the list of features buyers use to decide which smart TVs to purchase. So your app should also have this capability. 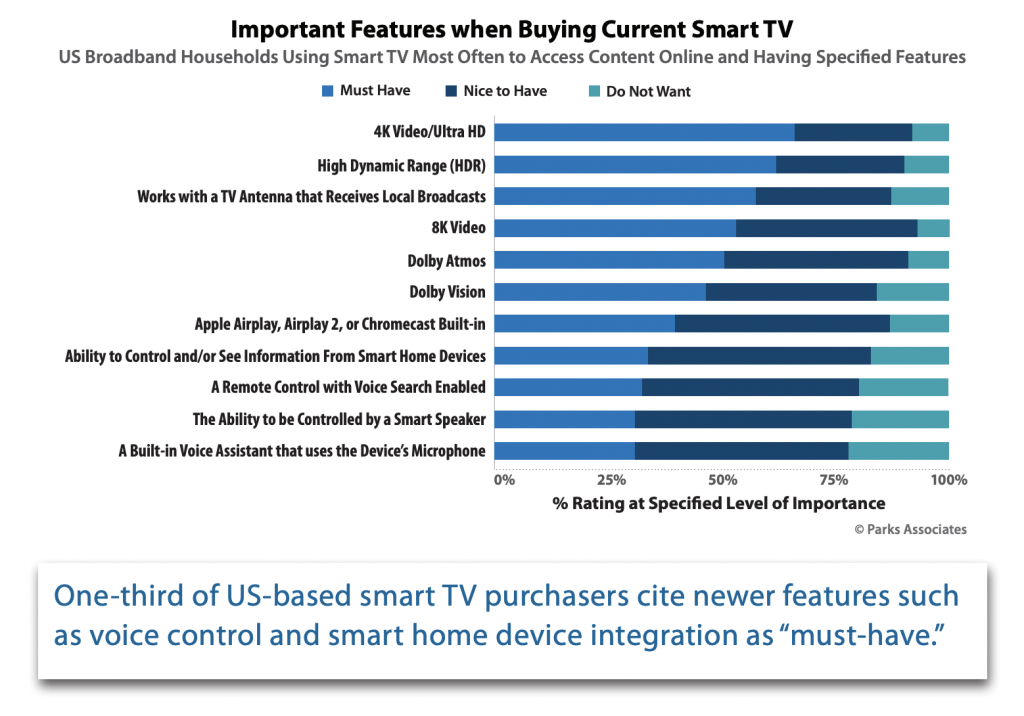 However, just because you build out this feature doesn’t mean a consumer’s smart TV will have the capability to run it. The same is true if you want to allow push notifications, but the TV OS overrides or prevents them.

That’s why your team needs a solid understanding of what the most popular smart TVs can and cannot do, including:

read next: ott cross-platform design and ux across mobile, web, and tv

Developers must create intuitive, easy-to-use apps to attract and engage viewers. Users should have a bird’s eye view of their content with easily navigable menu screens. And they should be able to quickly discover, focus on a selection, return home, etc. in a flash.

This calls for a team dedicated to advanced UI and UX design.

User interface (UI) refers to the viewer’s physical interaction with your app. It covers everything from your app’s buttons and menus to the layout, sounds, colors, video previews, etc.

User experience (UX) defines how the UI works in your customers’ hands to deliver their overall viewing experience. UX design goes beyond aesthetics to address each viewer’s needs, anticipate/solve problems they may encounter, and enhance customer satisfaction.

If your viewers don’t like the way your app works, they’ll stop using it and cancel their subscription. But if your app is intuitive and easy to use, viewers will have a pleasant user experience that encourages them to return for more (and share their experience with their friends!).

COVID-19 may have accelerated the shift to smart TV streaming, but there’s still time to get your OTT app out there to compete with the top dogs. As subscribers around the world experiment with different streaming options, you can rest assured that the smart TV will remain at the heart of their connected household — even if the TV’s native apps suck.

Committing to better smart TV app development is an investment in your brand’s future. So you’ll need a team well-versed in various programming languages and native device functionality. And remember, a keen eye for detail and UI/UX design ensures your viewers not only love using your app, but recommend it to all their friends.

Guess what? The team here at Zemoga tick all those boxes (and more!). So get in touch with our experienced team now to see how we can build better apps for you.