OTT Advertising UX Takeaways and Lessons from Hulu and Roku

OTT ad revenues are expected to hit $5 billion by 2020. Pump up your profit margin with these simple tips for attracting advertisers to your OTT platform.

Ever since Netflix launched its streaming video service, consumer demand for over-the-top (OTT) viewing has spawned a slew of ad-supported streaming services. And with media giants like Viacom’s Pluto TV, Xumo, Roku’s Roku Channel, Samsung TV Plus and Amazon’s IMDb TV all jumping onboard, a great deal of attention has gone towards the ad dollars that will inevitably flow into the OTT ecosystem.

According to Magna Global, OTT ad revenues hit $2.7 billion in 2018 with an impressive 54% year-over-year growth. Based on these results, Magna has predicted that OTT ad revenues will reach $5 billion by 2020. But, for this to occur, OTT providers need to win the war against linear TV for ad budgets.

Streaming now accounts for one-third of TV viewing, but as it stands, OTT has only captured 3% of the $70 billion that marketers currently spend on TV advertising. So, as consumers flock towards internet-enabled TVs and devices—how can OTT providers drive advertisers away from linear TV and capture their share of ad budgets? We think user experience is the answer.

Let’s learn from the market leaders in OTT advertising on how they incorporate user experience into their gameplan—Hulu and Roku. 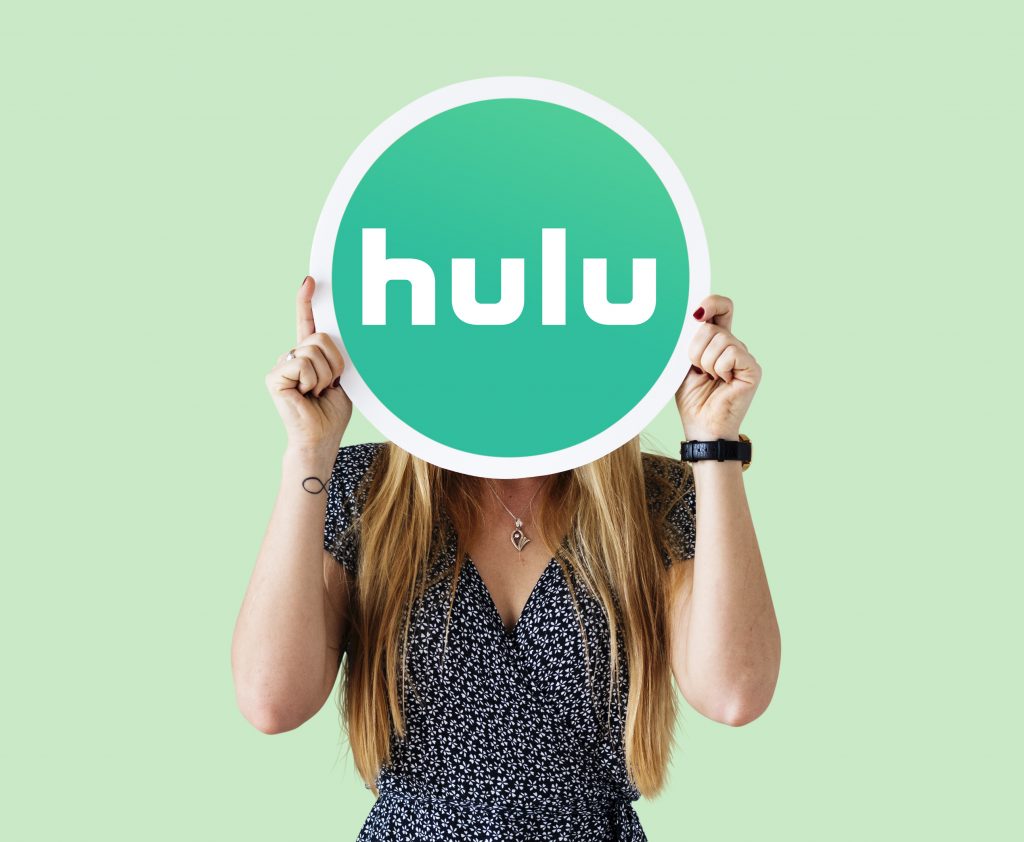 With 28 million subscribers, Disney’s Hulu is a key player in the battle for OTT ad budgets. The premium subscription video streaming platform reported ad revenues of nearly $700 million in 2019. To keep driving ad revenues in 2020, Hulu is taking a “viewer-first” approach, which promises to deliver less disruptive, more engaging, and more functional ads. Here’s what you can learn from Hulu.

To make your OTT service attractive to companies looking to leverage the power of OTT advertising, you need a large, engaged audience, which is achieved not only through great content but also through meaningful and relevant improvements in user experience.

To retain its subscribers and deliver “targeted” ads, Hulu is giving viewers more control over the ads they see. The company recognizes that consumers want a tailored ad experience with products and services that are valuable and useful to them. As a result, Hulu’s forthcoming “choice-based” ads enable users to select the type of ads they want to see from brands. For example, viewers could choose to see shoe advertisements from a sportswear brand or ads on their favorite cuisines from a food delivery service.

Hulu has also put a great deal of effort into enhancing user experience with less disruptive ad formats. For example, last year, Hulu introduced Pause Ads, which appear only when the pause button is pressed. These ads are not videos as advertisers don’t want to spend money on a 30-second commercial that viewers won’t see because the doorbell has just rung, or they unpause the content a few seconds later. Also, as a viewer, the continued sight, sound, and motion of a video ad after you’ve pressed paused could be annoying, especially if you’ve just answered a phone call.

App users will naturally need to pause their programs regularly as day-to-day life gets in the way. Rather than displaying the normal static screen from a pause, Hulu’s UX team considered how to maximize this frequently occurring phenomenon in a way that sought to accomplish several important ad considerations.

Additional thought went into how viewers watch TV on their devices and how to maximize the effectiveness of the Pause Ads.

Hulu’s Pause Ads are akin to a translucent banner that appears on the right side of the screen. These banners are far less intrusive and allow brands to get their message across efficiently and in a straight-forward manner. Additionally, Hulu’s Pause Ads don’t appear until several seconds after the user has stopped touching the controls just in case the user wants to rewind or fast-forward the content.

“A pause is a natural break in the viewing experience,” says Hulu VP and Head of Ad Platforms Jeremy Helfand. “You can catch the attention of the viewer, but do it in a non-disruptive way, and then, when the person hits play, the ad disappears right away.” It is speculated that Hulu uses AI to examine a show’s metadata and serve an ad accordingly. For example, let’s say a viewer is watching an extreme sports-fueled movie such as Point Break. An app development team could use metadata of the show’s existing or upcoming scene, say surfing, then have the show trigger a wetsuit ad should a potential viewer pause at that moment.

In addition to the Pause Ads, Hulu has introduced a unique ad experience specifically designed to target binge-watchers (e.g., viewers who are watching multiple episodes of a program in rapid succession). Leveraging machine learning technology, Hulu predicts and displays a series of contextually relevant ads when a viewer has begun binge-watching. Once the viewer reaches the third episode, they receive an ad-free episode or a personalized offer from the brand partner.

Another innovative way Hulu plans to increase the value of its advertising platform is through “transactional” ads that empower people to interact with the brand. Even though 80% of video viewing takes place on a TV screen, most people prefer to make transactions on a computer or their smartphone. Taking this into account, Hulu is creating new ways for consumers to interact with brands that feel safer and more comfortable.

For example, if a viewer would like to receive further information about a product or service from a brand, Hulu can send this information directly to their phone or the email address associated with their account. Alternatively, users can take immediate action by holding their phone up to a QR code on the screen. As viewers already trust Hulu, they’re likely to feel more comfortable taking action, such as visiting a brick-and-mortar store or registering for an event.

The rapid growth of OTT ad spend is mostly due to Roku, which surpassed 30 million active monthly subscribers in 2019 and saw revenues grow 86% from $399 million in 2016 to $743 million in 2018. As one of America’s leading Connected TV platforms, there’s plenty to learn from Roku, especially when it comes to data and analytics.

Roku has enticed advertisers away from traditional TV by launching what is called the Audience Marketplace. Combining Roku’s own first-party data with trusted third-party validation tools, publishers can sell audience segments to advertisers.

Roku has insights on millions of OTT viewers and enables advertisers to target viewers by demographics, streaming behaviors, and interests. As a result, brands are much more likely to reach audiences who are interested in their products or services with the right messaging at the right time. With the ability to continually roll out increasingly targeted campaigns, brands can maximize ROI.

For example, MillerCoors brewing company partnered with National Geographic to produce captivating content based on real stories. Leveraging Roku’s first-party proprietary data, MillerCoors was able to precisely target viewers on the Roku platform who had expressed an interest in adventure and craft beer.

Advertisers not only want demographic and behavioral data to drive proper targeting and market segmentation, but they also want to measure the effectiveness of their campaigns so that they can continually adjust and refine their strategy. Roku responded to this need by introducing Ad Insights, an extensive suite of tools that allow marketers to measure campaign reach and engagement across channels and services. Advertisers can track their campaigns in real-time with metrics such as ad impressions and click-through rates, in addition to scheduling automated reports that breakdown ad placement. It’s this transparency that advertisers really value.

Roku also allows brands to measure their campaign’s effectiveness against their business outcomes, such as the number of purchases or location visits that an OTT ad drove. For example, Roku was able to integrate a trackable coupon to show Baskins-Robbins that their OTT ads directly incentivized 100,000 consumers to visit their brick-and-mortar stores. Because the coupon was featured as an overlay on top of the traditional TV ad, the offer was consistent with the video ad.

If the goal of UX is to provide impactful, relevant experiences for the user, this overlay example really shows how advertisements can be used to enhance the experience of an audience.

Due to this reporting integration, Roku was able to measure the return on ad spend for Baskin-Robbins so that they could understand how OTT advertising drives their bottom line. 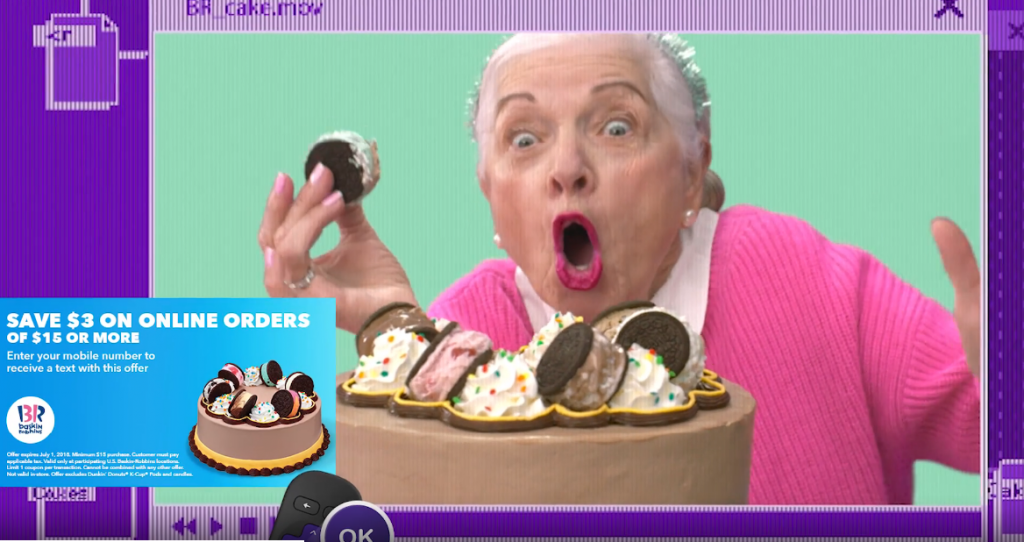 If you want to win advertisers over, you need to show them tangible results. Your platform should have the capability to generate data that draws the dots between a user viewing an advertisement on your platform and the achievement of a measurable business outcome.

In late 2019, Roku released yet another powerful analytics tool to draw marketers away from traditional TV advertising. Activation Insights helps brands understand and quantify users’ TV consumption habits across OTT and linear. It works by measuring how many times a brand’s ad was viewed by Roku users watching traditional TV over the course of 90 days. Then it analyzes how many more unique consumers the brand could reach by shifting their budgets from linear to OTT advertising.

These cross-platform insights are incredibly beneficial for brands who can no longer reach their audience on linear TV, such as those targeting millennials. For example, Roku helped Baskin-Robbins realize that 86% of their Roku audience aged between 18-49 no longer existed on linear TV. As a result, Baskin-Robbins were able to gain an additional 10.6% increase in reach among their target audience by shifting their budget to OTT advertising. Roku was able to achieve similar results for RE/MAX.

Let’s face it, good app engagement is what is ultimately going to help monetize your app.
What are some user experience differentiators you can use to make your content more bingeable and thus drive more advertising dollars? Here are a few of our favorites:

Bingeable content is made possible through good UX. This, in turn, equates to a better engaged audience who receives more exposure to ads. Services that can win on these fronts will be more attractive to advertisers and have the best chance of monetizing their apps.

At Zemoga, we’ve worked closely with Hulu and have been designing and building better digital experiences for over 15 years, and we have a full stack team that can provide end-to-end solutions within the ever-expanding world of OTT. We can not only deliver high-performance analytics, KPI monitoring, and reporting but also deliver improvements in user experience.